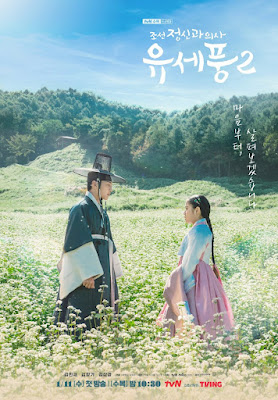 A genius physician for the royal family faces expulsion from the royal court after getting himself involved in a conspiracy, meets an eccentric teacher and a widow in the mysterious and beautiful Gyesu Village.

He is reborn as a true doctor who aims to heal people's hearts, writing the prescription of happiness.

Kim Min-Jae as Yoo Se-Poong | Yoo Se-Yeop, Born to a noble family, he becomes the head acupuncturist of the palace. When the King dies after he performs acupuncture on him, he is expelled from the palace and his own father is murdered. Traumatised by these events, he can no longer practice acupuncture and cannot sleep because of nightmares. After wandering around for a year, he arrives at Gyesu Village, where he gains the nickname 'Poong'.

Kim Hyang-Gi as Seo Eun-Woo, A young widow who listens to the stories of those who are sick. She is the daughter of the magistrate of Sorak. Following her husband's death on her wedding day, she was constantly bullied by her in-laws, which led her to attempt suicide multiple times. After being freed from her in-laws, she starts learning medicine at Gyesu Clinic in order to become a female physician.

Kim Sang-Kyung as Gye Ji-Han, he head of Gyesu Clinic. A geeky doctor and Yoo Se-poong's 'outside-of-the-box' teacher. Though he appears to be greedy for money, he is a warm-hearted person who helps those in need.